'Wildfire' in California has a diversity of energy releases, ecological fire effects, and size because of our natural history and modern drivers. Wildfire regimes are influenced by basic physical characteristics of topography, vegetation, and their ignition. In addition, humans alter the structure of vegetation, the type of vegetation, and how start fires either by accident or on purpose.

All of these factors vary between and within California's regions, but there are common trends:

The wildfire history for 1,000s of years shaped the way that many plants and animals are adapted to fire. You can learn more the fire ecology of specific regions or understand fire history of each region below.

What is fire? Fire is a chemical reaction that occurs when fuel, oxygen, and heat interact.

What alters fire behavior? Fire behavior is guided by the topography, fuel, and weather.

What is a fire regime? Fire regimes described the characters of wildfire, including how frequently is burns, the fire size, the energy release of the fire, how it alters vegetation, and how wildfires interact with other factors like weather, insects, and disease. 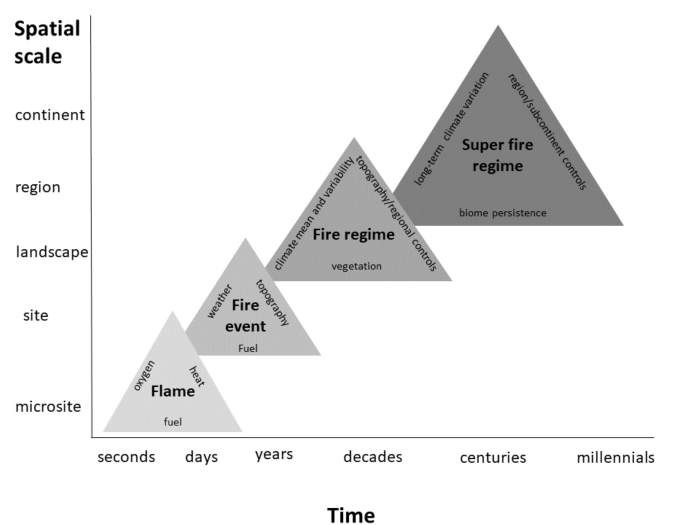 Sierra Nevada: The Sierra Nevada and Cascade Ranges form an axis of high mountains east of the Central Valley and Klamath Mountains. The Southern Cascade Range bioregion is the southern end of an extensive chain of volcanoes and volcanic flows extending northward from Oregon and Washington. Mount Shasta and Mount Lassen are the two largest and most well-known Cascade volcanoes in California. The Sierra Nevada bioregion extends south from the Cascade Range 600 km (373 mi) to the Tehachapi Mountains. Vegetation generally occurs in elevation bands with oak  woodlands and chaparral in the extensive foothills on the west side of these mountains. The lower montane zone consisting of mixed conifers gives way to an upper montane fir forest and montane chaparral at higher elevations. The highest mountains and ridge tops support subalpine forests and alpine meadows and shrublands.