The eave is the part of the roof that extends out beyond the exterior wall.

There are two ways to detail the underside of the eave - the intersection between the exterior wall and the roof. These include 'boxing-in' and using open framing (open eave). Other terms for 'boxing-in' include a 'soffited eave'. If you have a 'soffit' you have used a 'boxed-in' technique. Most homes use an open eave / open framing detail because it is less expensive ' you have used an open frame technique if you can see rafter tails, and between rafter tail blocking.

This photograph shows a strip vent. 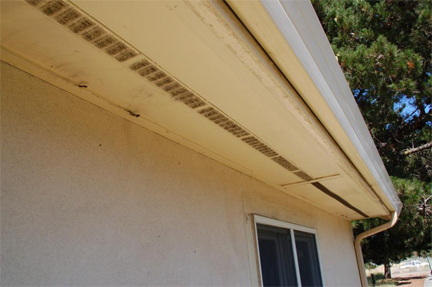 This is an example of open-eave framing. The blocking has typical frieze-block vents ' these are inlet vents. Outlet vents are on top of the roof. Currently vents are not allowed in an eave / soffit area unless the vent has been shown to resist the intrusion of embers and flame. Vents that have been accepted for use by the Office of the State Fire Marshal can be on their website.

Accepted vents aren't currently included in the Wood Products Handbook because a standard test method to evaluate vent performance to ember and flame exposure hasn't been approved yet. 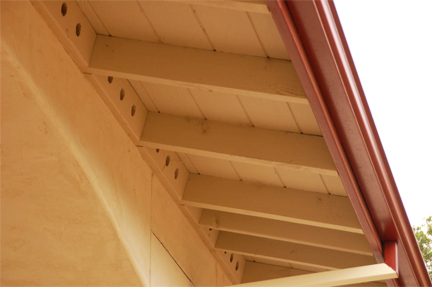 In creating a soffited eave, the enclosed soffit must be able to communicate with the attic space. In this photograph, frieze-block vents are used in the between joist blocking. The vent in the (to be installed) soffit material would currently have to be accepted for use by the California OSFM, or local building official. 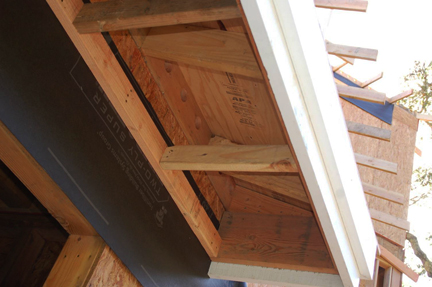 Chapter 7A requirements for eave protection states that either they:

The main objective of the 'eave protection' requirement is to stop fire from getting into the attic. It says that eave protection can be obtained in one of three ways. You can use ignition resistant materials or noncombustible materials on the exposed underside, or the underside assembly can be tested to (and pass) SFM 12-7A-3. Given the differences in construction of 'boxed-in' and 'open-eave' designs, you can see that the details of complying will be more or less complicated, depending on the construction technique chosen.

This photograph shows the flame impingement exposure during a SFM 12-7A-3 test. 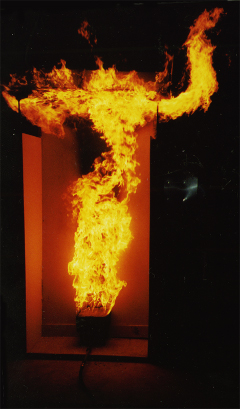 Boxed-in: If the soffit material (the material that you 'box-in' with) is rated as noncombustible (for example, three-coat stucco, or a fiber cement soffit material) or 'ignition resistant' (for example, exterior rated fire-retardant-treated plywood), then the design would comply with the provisions of Chapter 7A. If you want to use untreated plywood, or wood tongue-and-groove material as the soffit material, then this construction would have to be tested to SFM 12-7A-3. If the material and design being proposed for use hasn't been tested, then it would have to be tested and approved by a certified fire testing laboratory. 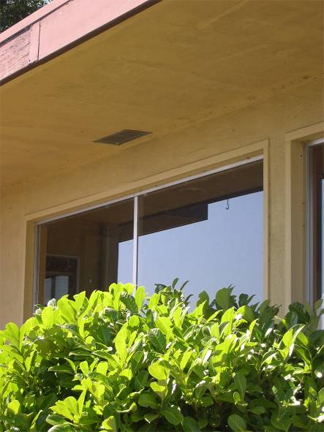 Open-eave: When you look at the open eave detail, you see the rafter tails, the blocking, and the roof sheathing that extends beyond the exterior wall. A normal 'generic' assembly could consist of 2x rafter tails, ACX plywood sheathing, and 2x4 or 2x6 blocking between the rafter tails. If this assembly were to be tested to SFM 12-7A-3, and pass (i.e., flame doesn't penetrate beyond the blocking, into what would be the attic space), then this assembly would comply with Chapter 7A provisions. Since this assembly has been rated as 'fire resistant' in the building code, there have been discussions as to whether this assembly should be tested to SFM Standard 12-7A-3. The California Building Standards Commission is currently considering language that would clarify this issue.

If exterior rated fire retardant products were used in the assembly (plywood sheathing, 2x rafter tails and blocking), the assembly would comply because 'ignition resistant' materials were used. If noncombustible materials (fiber cement panel, stucco) were used as the 'sheathing' it could also comply.

This photograph shows one joist bay in a roof framing system. Not the gap between the bottom of the 2x blocking member and the top of the exterior wall. This gap would make the this area more vulnerable to ember and flame intrusion. However, the intent of the standard test isn't to determine the vulnerability of poor construction practices. 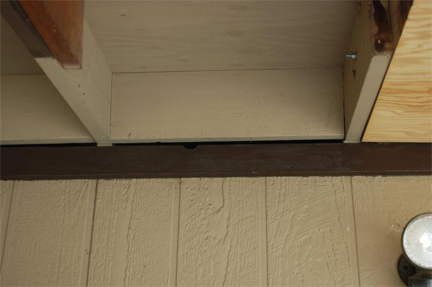 This photograph was taken looking into a soffited space from the attic during a 12-7A-3 fire test. The soffit material was untreated tongue and groove boards. Note that burn through occurred at the joint. Testing has shown that, with wood and wood-based products, vulnerable characteristics include 1) joints, 2) knots, and 3) in the case of plywood panels, core gaps in the inner plies. Products that comply via this option have certain restrictions on grade. 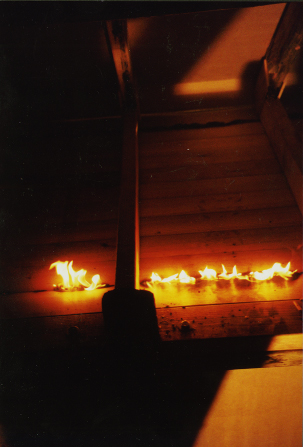 Products and assemblies that have complied with Chapter 7A can be found in the WUI Product Handbook. Since 'ignition resistant' and 'noncombustible' are performance-based characteristics (i.e., there is a standard test to show compliance), these materials will be included in the Handbook.

The OSFM Building Materials Listing program is voluntary, but it is used by many manufacturers that have products complying with Chapter 7A. Products that comply are, by component, on the OSFM website (click on 'NEW PRODUCTS HANDBOOK').

The listing is based on an evaluation of test results that include an analysis of required product performance and reliability features. Listed products have been tested by a SFM accredited laboratory.

From the perspective of a wildfire exposure (ember or flame), a narrow overhang is arguably better. Your home will experience other exposures during its life, however, which you should consider. As shown in this photograph, a wide overhang is a much better option for protecting exterior walls from rain - the wider the better.

In this photograph the wider overhang on this home provided complete protection to the wall during the rain shower. 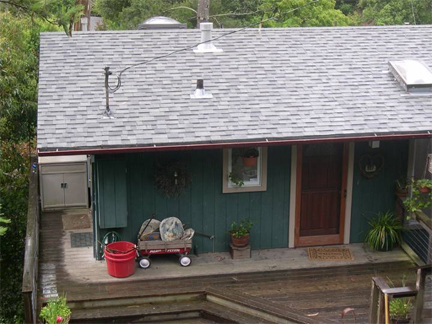 This figure shows the results of a survey of homes that was funded by the Canada Mortgage and Housing Corporation (CMHC) and published in 1996. The y-axis shows the percent of homes surveyed that had water related problems. The x-axis is the width of the overhang above the exterior wall. This graph shows that more water-related problems were associated with walls having narrow overhangs. 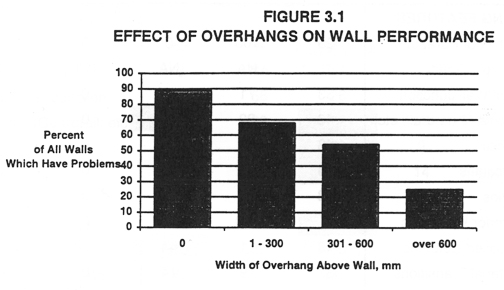 This is another example of the protection from rain provided by a wide overhang, in this case the head the window. The darker (lower) portion of the wall has been wetted by rain. 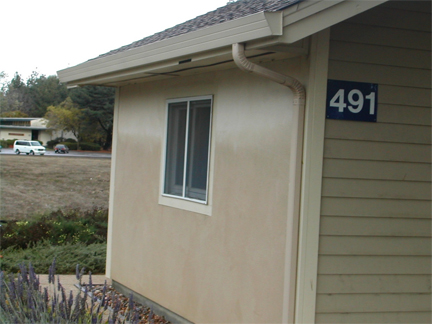 A wider eave can be protected from wild fire exposures by using ignition resistant or noncombustible materials. In this case the overhang (on the rake end of the building) is protected by stucco that was wrapped around and under the eave. 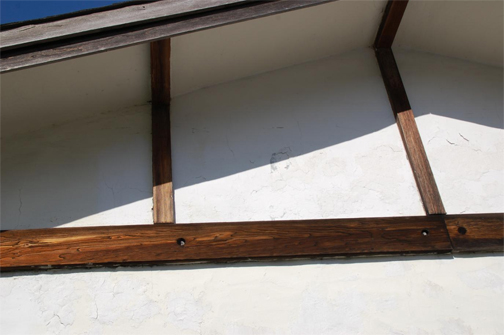