Attic and crawl space vents are incorporated into buildings to help remove excess moisture that can move into these spaces, either from the soil (in the case of a crawl space) or from the living space (in the case of attics and cathedral ceilings). Depending on detailing used, air from the crawl space can also communicate directly with the attic space. Movement of moisture can be via diffusion through materials, or convection through air leakage. Moisture movement via diffusion is a slow process. Moisture-related problems are more likely related to air leakage.

Leaks in the building enclosure (roof or exterior wall) can also result in elevated moisture conditions. Leaks are the cause of most moisture-related problems in buildings. Depending on the size of the leak, vents may or may not be able to provide sufficient drying capacity to avoid moisture-related damage. 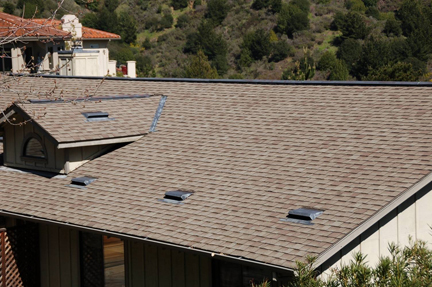 There are several kinds of vents. In crawl spaces two or more vents, to allow for cross ventilation, are used and should be located on at least two opposing walls. In attics and cathedral ceilings, air inlet and air outlet vents are used. Inlet vents are usually in the eave and soffit area. Outlet vents are placed at or near the ridge line of the roof. A ridge vent and through-roof vents can be seen on the roof of the building shown here. 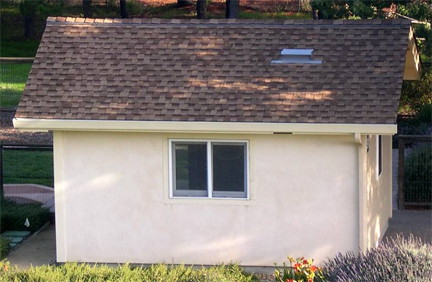 A strip vent in a soffited eave and frieze block vents in an open framed eave are shown here. 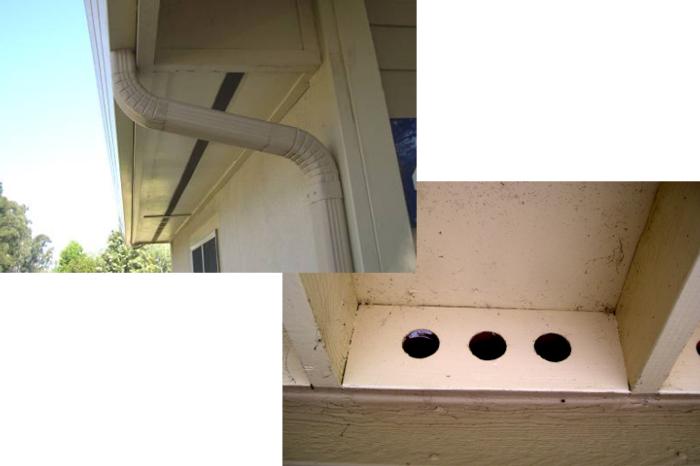 Vents are vulnerable to wildfires when embers and flames enter into the enclosed attic or crawl spaces, and ignite combustible materials in those areas.

This is a photograph from a test conducted in a fire research laboratory. It shows fire penetrating a frieze-block vent with flames entering into what would be the attic. Vent screens don't impede flame entry. Wind-blown embers can also enter through vents, and depending on the ember size and quantity, and the amount of combustible materials in the attic or crawl space, ignitions can occur. 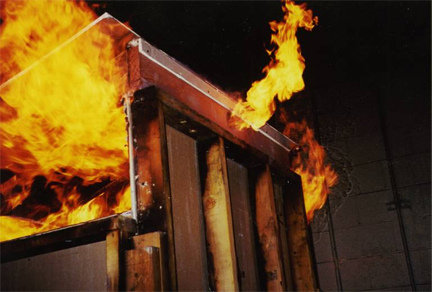 Example of fine fuels in attics. Embers will ignite finer combustible materials which, if sustained, can in turn ignite larger structural wood members and other combustibles in these spaces 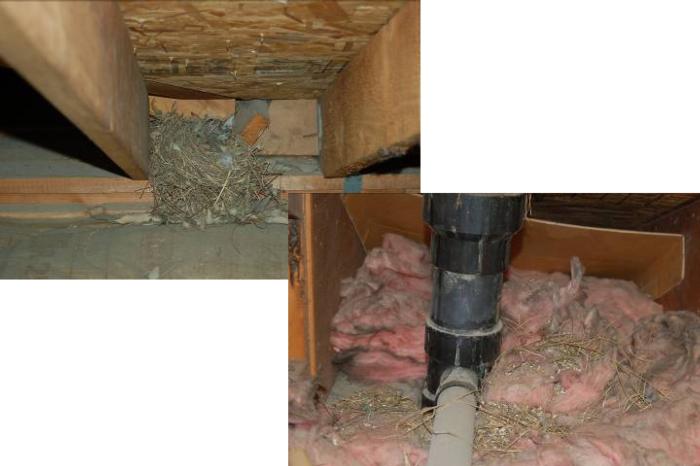 Laboratory studies have shown that embers passing through '' mesh screen have sufficient energy to ignite fine fuels (cotton and shredded paper). Screening was originally used in vents to prevent rodents from entering these enclosed spaces. Vulnerability to wildfire exposures wasn't a consideration at the time.

Whereas finer mesh screening would minimize the chance of embers resulting in ignitions (smaller embers would have less energy), building officials are concerned that finer mesh screens can become plugged with debris, or paint, thereby having a negative effect on the 'moisture management' function of vents. The 1/16' mesh screen shown here has been covered up by paint.

Because of the wildfire threat, smaller mesh screens are starting to be allowed. This will require the home or building owner to be more careful, and not allow paint or debris to plug up vent screens. Other vents, specifically designed to resist the entry of embers and flames, have been developed. More information on these vents is provided in another section. 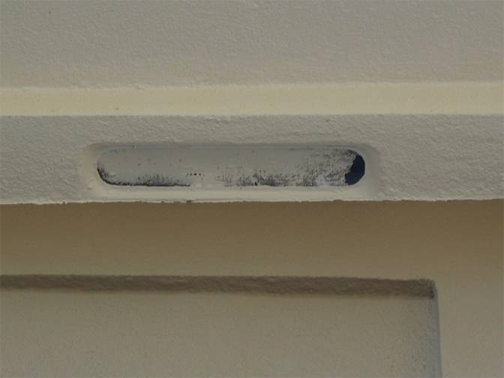 The importance of ember and flame entry into vents during wildfires has resulted in the development of vents designed to resist the intrusion of embers and flame. This development has been encouraged by language in Chapter 7A of the California Building Code.

This photograph shows the upper part of a combustible wall. Three frieze-block vent holes can be seen in one section of blocking. 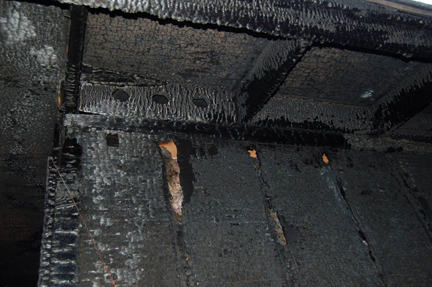 Chapter 7A language also specifies that vents cannot be used in an eave application unless that vent has been shown to resist the intrusion of embers and flame. Although there are a now few vents that have been accepted for use by the California OSFM, a design that incorporates two sets of through roof vents, one set for inlet air located near the roof edge, and another for outlet air located near the ridge (as shown here), has been used. Modifications to Chapter 7A that would provide for more prescriptive measures for complying are currently being considered by the California Building Standards Commission.

Currently there isn't an accepted procedure to evaluate ember intrusion, but an American Society for Testing and Materials (ASTM) task group is currently developing a standard test procedure. 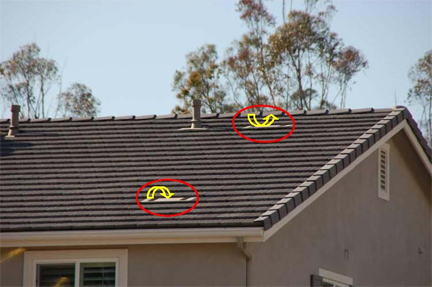 Four vents have recently been accepted for use by the Office of the State Fire Marshal ' these vents can be used in applications where 'ember and flame intrusion' resistance is required. These vents typically use a combination of screening and other design features to resist intrusion of embers and flames. Information regarding these vents has been posted on the OSFM site (scroll down this page and click on 'Information on Product Compliance Policy for Wildland Urban Interface' in the Building Materials Listing Program section).

The vent shown here ('Vulcan') uses screening on the front and back of the honeycomb matrix. This matrix is coated with an intumescent paint that swells when contacted by flames. 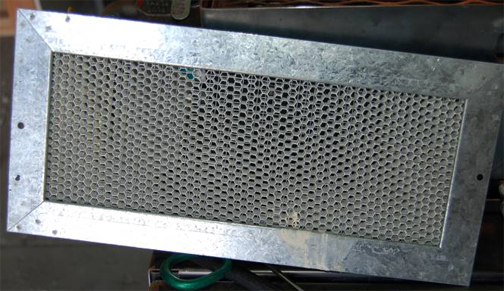 The Fireguard vent uses screening and a fused-link. The fused-link device is shown in the photo inset. Activation of the fused-link causes a metal door to close. 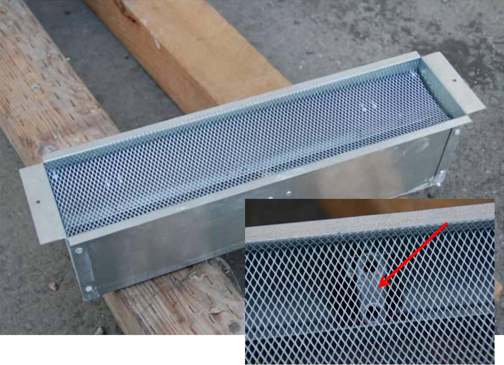 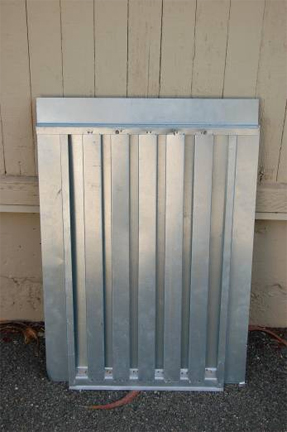 Except for corrosion resistant metal language, Chapter 7A doesn't restrict through-roof vents. Still, O'Hagin has submitted testing information to OSFM, and has been accepted as an 'ember and flame resistant' vent. 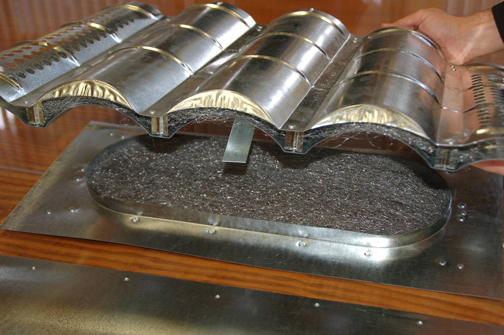 Vents accepted by the OSFM have provided testing information that was conducted by an accredited fire testing laboratory. Testing has evaluated the ability of a vent to resist intrusion of embers and flames. Since vents can be exposed to embers, without being exposed to flames, separate tests are run. 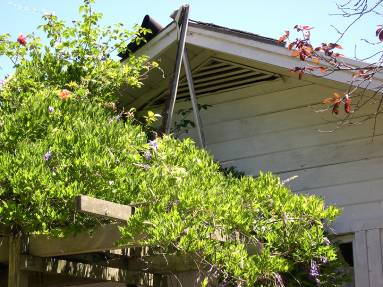 In addition to information regarding ember and flame intrusion resistance, you should also be looking at available air flow information. This is normally given in 'percent net free area' and provides information on how much area the wire (or other device(s) used in the vent design) is occupying. For comparison purposes, '' mesh screen has a net free area of 81%. 1/8' and 1/16' mesh screen have net free areas of 75% and 71%, respectively. Screening with smaller openings uses smaller diameter wire. 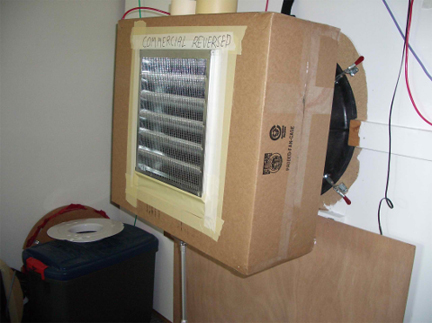 Some alternative (but still traditional) vent options have been developed. These are shown in the next several photographs. None have been tested to evaluate performance, and done of the following have been accepted for use by OSFM. They are included here to show the range of venting concepts that have been discussed.

In this diagram, interior and exterior blocking with off-set frieze-block vents. The interior surfaces could be coated with intumescent paint. 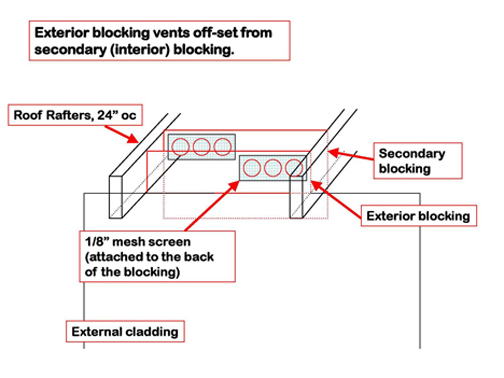 In this diagram, interior and exterior blocking with an alternative design for off-set frieze-block vents. The interior surfaces could be coated with intumescent paint. 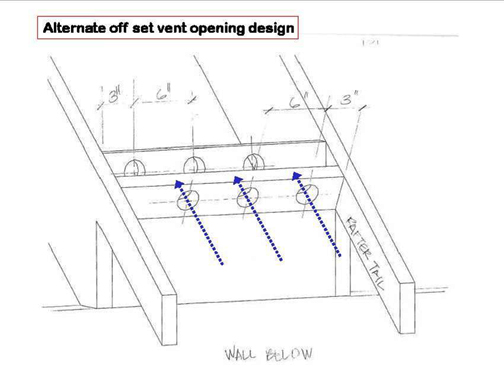 In this diagram, the eave has been enclosed, and a strip vent installed in the fascia. This is arguably a more severe exposure ' the fascia board cannot serve as a barrier to impacting embers. 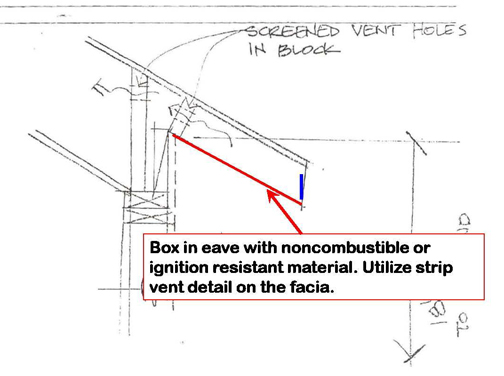 An example of soffit /eave strip vent in the fascia board. This design is on a home, and so was probably approved for use by the local building official. 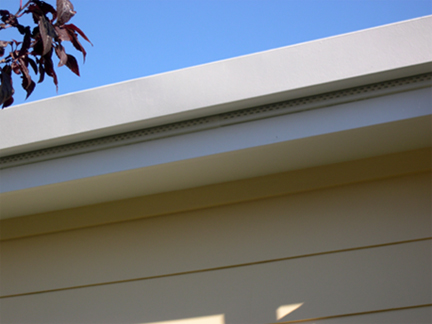 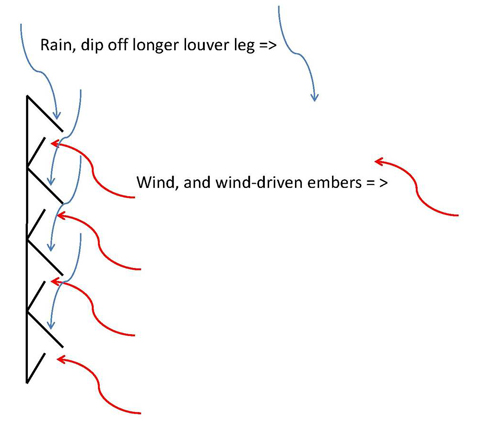 One option to avoid ember entry into attics is to use and unvented design. An unvented attic is one where vents are intentionally omitted. There are two common features to an unvented attic design. The first is the thermal barrier (i.e., the location of the insulation) is moved from the ceiling plane (between living space and attic) to the roof line (i.e., to the underside of the roof sheathing). Usually closed or open-cell foam insulation is used in unvented attic designs. The second feature is the installation of an air barrier. With an unvented attic design, the attic becomes a conditioned space (i.e., one that can be heated and cooled). Insulation applied to the bottom of the roof sheathing keeps the attic warm, avoiding temperatures that would lead to moisture condensation. The air barrier minimizes moisture movement. 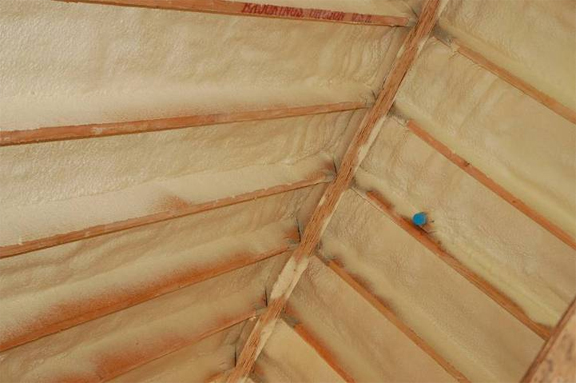 This section is under construction - please check back.